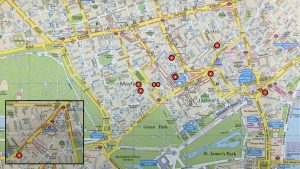 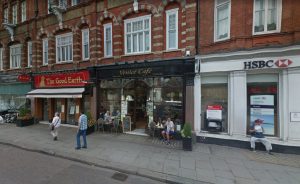 This was once antique store that sold the kind kosnipor (cow creamers)
Tom Travers gathered in. Aunt Dahlia gave Bertie Wooster mission to
consult the store and try to buy a separate copy. Bertie's task was to
negotiate a low price by claiming that kosnipan was not genuine but a "
contemporary Dutch work "(see Code of the Woosters" page about 19-21).

In later books, Bertie lives in one of the apartments in the "Berkeley Mansions" lying in
Northwest corner of Berkeley Square, perhaps the corner of Mount Street. 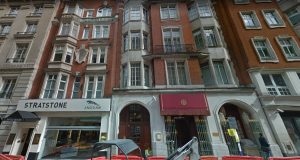 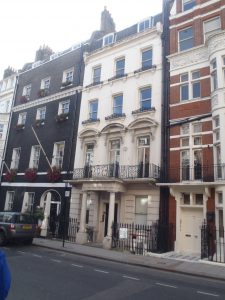 Here in this white building lived Mrs. Dahlia Travers, that Bertie's Aunt Dahlia.
Across the street is the pub frequented by the area's butlers and other
downstairs.
(Winston Churchill is said to have lived for some time in the house next door, No. 48)

4/ The Only Running Footman.

Corner Hay's Mews and Charles Street. Here placed Wodehouse the famous Club: Junior Ganymede Club Jeeves was a member of. In its day, this was the only pub in this noble field. The frequency was basically only by those who served in the various families. Very strict hierarchical rules applied to any of the bars to the different categories of servants were allowed to visit. To describe Murphy in his book how the division looked like:
"The Private Bar", on the top floor, was designed for "stewards, butlers, gentlemen's gentlemen and valets"
The Snug Bar, which was the floor below, frequented by "senior footmen, grooms head and the same."
The Saloon Bar turned to "footmen, grooms and chaufeurs".
The Public Bar, on the ground floor, was designed for all others as "hall boys, stable boys and odd job but" 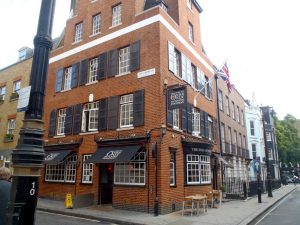 The Only Running Footman 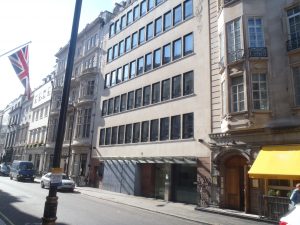 Approximately opposite Brown's Hotel. (See 6/18 Clifford Street)
Wodehouse model was the Bath Club (Which at that time lay on Dover Street 34)
which was destroyed during World War II.
It occurred on for Bertie eternal fadäsen as Tuppy Glossop cheated him
try to swing the club's swimming pool in the ropes and rings that hung there. It was a
type of betting that attracted Bertie. But all too late, he discovered Tuppys
sneaky deception to remove one of the ropes. Bertie was helplessly hanging in the middle of
bassin. He had finally let go and did so as an involuntary dip
wearing tuxedo. Bertie tried, usually unsuccessfully, in various ways to take revenge on
Tuppy during the rest of his life (tex. Jeeves and the Yule-Tide Spirit).

It is now Buck´s Club. 100 years ago it was called "The Bachelors Club," an inside club for young men about town.
Sometime in the 1920s the name was changed to Buck's Club. One time use Wodehouse this new name but apparently arose the problem. He changed it when the The Drones Club. A name that he had previously used with an address on Dover Street. In Swedish called Drönarklubben and was Bertie and his like-minded as a second home. 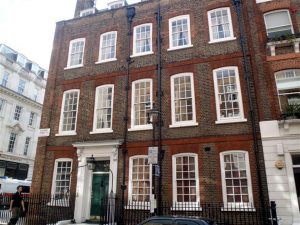 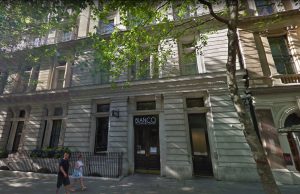 Located close to Trafalgar Square.
This low as Wodehouse once The Constitutional Club, which he named as
the Senior Conservative Club. He was himself a member (from 1905) as well as the Lord
Emsworth and Rupert Psmith.
The house is rebuilt in 1964 and reflects quite accurately the original appearance.
Tex arched bay windows that originally contained the club's dining room.
The club was known among other things for its impressive marble staircase and its excellent cuisine.

Go down Old Burlington Street. Turn right along the Burlington Gardens towards
entrance to the Burlington Arcade. Inside the arcade after about 20 yards on the left side there
a showcase full of silverware, including kosnipor. We can imagine that Tom
Travers visited the arcade on the lookout for various unique findings (see also 1 / above). 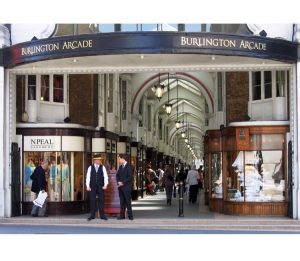 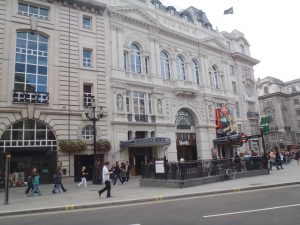 Gally Threepwood often frequented this bar. Here he detailed feel
waitresses and the ballet girls who found their way there from the nearby cabaret engines.
Lord Emsworth's butler Beach`s niece Maudie Montrose worked here. She
later married a BELONGING TO THE HIGHER NOBILITY, frequent bargäst and became Lady Parsloe-Parsloe.

Located opposite the pub, The Blue Post.
According to Murphy, this was "it all began" in 1905, that Wodehouse's writing.
Look for the two small windows at the top right under the roof next to the White House.
Wodehouse "first adult novel plot" was created here in a small apartment. Rupert Street
mentioned in six of his books: Not George Washington, The Girl on the boat, the Three
Men And a Maid, The Adventures of Sally, Mulliner Nights och Full Moon. 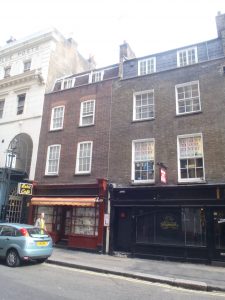